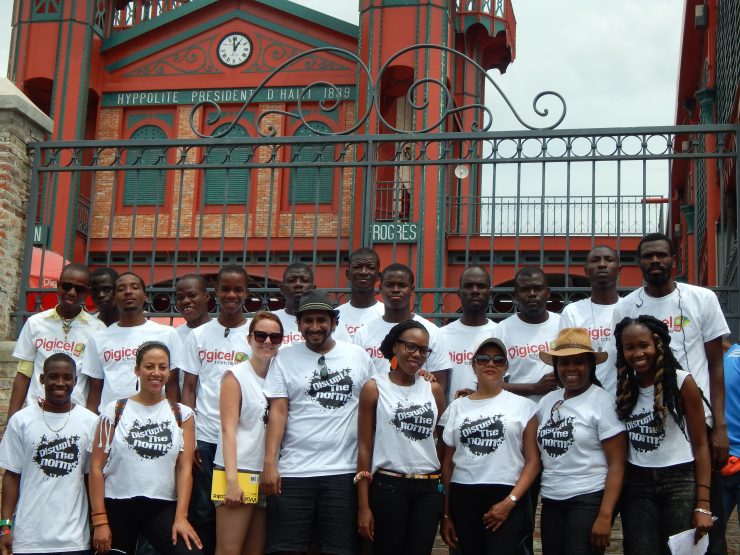 The concept of Vendedy is to create an online platform for international street vendors to sell their crafts, using a bidding process and the developing mobile payout technologies.  The project has garnered much attention since its development earlier this year by Souffrant, who was completing her MA in International Business at the Hult School of International Business, in Dubai.  Cofield and Souffrant met at Hult in January during a social entrepreneurship conference hosted at the school by the CYRUS Institute of Knowledge.  Vendedy was selected by the Clinton Foundation as a poverty alleviation project, and the platform is being developed in part by IBM.   September 2014, J Rêve founder Jacqueline Cofield traveled to Port Au Prince, Haiti with a team invited by Vendedy International CEO Christine Souffrant.  The goal was to launch the first of a series of international pilots for the Vendedy platform across the Caribbean, which is scheduled to have an official online launch in 2015.

The Haiti 2014 delegation included a team of experts across the financial (Deborah Hope, former chief risk and business ethics officer for global investment management at Prudential Financial), social entrepreneurship (Tena and Joshua Rajkumar, co-founders of The Sustainability Platform), and creative fields (J Rêve), selected by Souffrant to initiate the grassroots local campaign in Port Au Prince and establish relationships with prospective partners, such as Digicel, and various educational institutions whose business students would be interested in collaborating with the start-up locally.

Souffrant’s parents are from Port-Au Prince, and relocated nearly 30 years ago to New York, where Christine was born, though she was raised between Haiti and New York.  Her mother was a street vendor, therefore she was exposed as a young child to the market and the impact sales has on the daily life of vendors.  This is not only a social good project, it is personal for Souffrant and she is passionate to give street vendors the opportunity to elevate their standard of living through participation in the Vendedy platform.  Attending a meeting with the locals, hearing their stories, as well as the vendors, one quickly observes the potential impact the project has and also how it is also being called a movement.  Haiti is interestingly a test market for product launches across the Caribbean.  Digicel generously supported and participated in the pilot, offering staff members, supporting volunteers with needed arrangements at the Iron Market to conduct a series of vendor interviews and product evaluations, and communication “credit” for making calls using digicel operated phones.  Not only is Digicel the leading telecom company in Haiti, it has also developed a pay-out service, which makes it a highly desirable partner for the Vendedy project across the Caribbean.

Cofield was thrilled to have J Rêve International participate in the pilot of Vendedy in Haiti because it aligns with the mission and vision of J Rêve projects, involves creators, artists, craftsmen, microenterprise, youth entrepreurship, education and business development. Cofield liased with various artists and intends to return and explore the arts communities more in depth, as well as develop a branch of the Revved Up adolescent kid program.   To learn more about Vendedy, please visit the website www.vendedy.com.  Christine Souffrant, founder of Vendedy, was among those selected for the 2016 Forbes 30 under 30.  Congratulations!