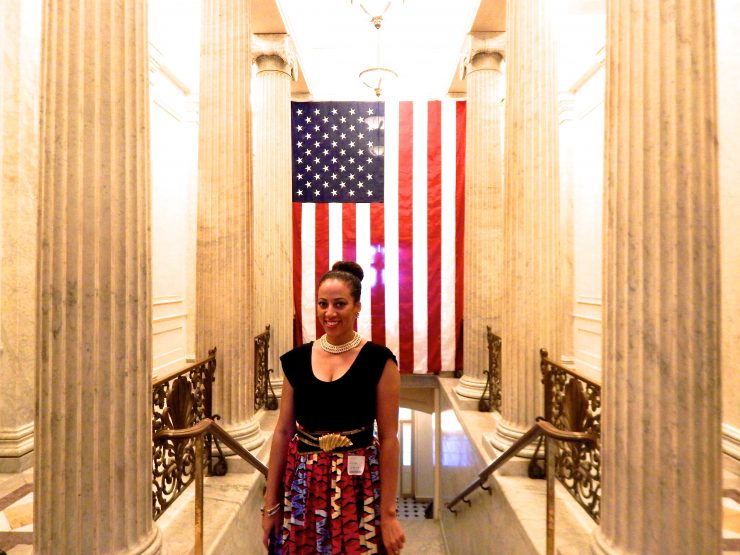 “Art is a tool for diplomacy.  It reaches beyond governments, past the conference rooms and presidential palaces, to help us connect with more people in more places. It is a universal language in our search for common ground, an expression of our shared humanity.” Hillary Clinton

In September, 2015, I visited Congress’s Capitol Visitor Center in Washington, DC with an international group of over 100 young professionals and entrepreneurs from the Middle East, Europe, and Africa.  While in DC, I also participated in a New Americans program discussion at the White House, and met with Ambassadors of Qatar, Cameroon and Benin, as well as with global White House youth advocate, Andrew Rabens.  Our visit to Congress began with a film on the US political system, and then a tour of meeting rooms used over centuries, where important public policy decisions impacting the nation were made.

A highlight of our trip was visiting the visitor Galleries of the chambers of the House of Representatives and Senate.  Perhaps many visitors don’t associate history with art, but the usage of art unquestionably plays an essential role in generating global understanding.  A plethora of sculptures and paintings adorn the halls, walls, and dome, and are referenced in the explanation of historical events by the institution’s tour guides.  I was so pleased to witness our global guests appreciating, taking photos, and discussing the works of art.  Not only will they return to their respective countries and show beautiful images of themselves with the various works, but their understanding and memory is enhanced because of the power of visual storytelling, a universal language.  The sculpture of Helen Keller, for instance, provided an opportunity to inform those ufamiliar with her important contributions to education.  Art is used for communicating a cultural and historical context in government and religious institutions worldwide.  A visit to the Vatican reveals the vital role that art plays in preserving and sharing historical events.

Beyond its usefulness, we subconsciously judge entire cultures based on reactions to and perceptions to creative productions, such as the visual and performing arts.  These judgements can have positive or negative implications, even resulting in the loss of life.  Through exhibitions at the Holocaust Museum, Los Angeles, and the Mirö show at Tate London, I’ve observed works of visual arts used in perpetuating Nazi propaganda during WWII, and during the Spanish Civil War.  Living in France, I also studied in detail artworks at the Louvre, Musée D’Orsay and others, learning important contextual details of European history.  Not having exposure to artworks of a culture conversely poses a potential threat to our appreciation for, understanding of and engagement with members of that culture.  Cultivating a general interest in exposure to global artworks is essential then to art diplomacy, and this can be done at micro and macro levels of society.

I am increasingly interested in exploring the theme of diplomacy through the arts; it is an important consideration in the projects that I pursue.  In college, I was a Rotary Cultural Ambassador scholar.  The Rotary foundation sponsored my travels to and studies in Mèrida, Venezuela, where I spent months learning Spanish, and studying Latin America cinema. I also gave several talks in the community about travel, and my studies in the arts.  I have never forgotten the mission behind the Rotary foundation’s educational philanthropy: To lessen the likelihood of war by increasing intercultural understanding through global exchanges.   In my experiences visiting over 50 countries, and living in 8, I’ve already experienced the impact that the visual and performing arts has in sharing cultures, increasing awareness of and interest in global issues, and enhancing education.  Still, there is not enough discussion of this theme and support for the arts globally, given this vital role.  Hillary Clinton wrote about the diplomatic role of arts in embassies in her Vanity Fair article, and Georgetown University MA student, Spencer James Oscarson wrote a compelling thesis on the theme, “The Art of Diplomacy: The Use of Art in International Relations.”  I look forward to continuing this discussion in J Rêve International’s global programs.